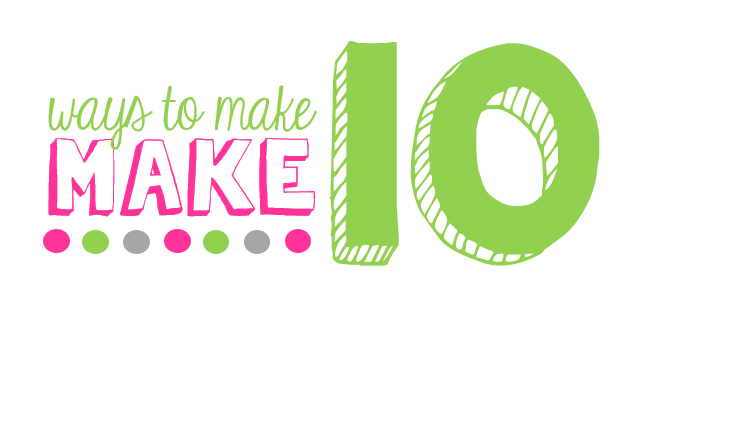 Hey there friends!  I am so excited to get this post put together!  I’ve been accumulating pictures from the past few weeks in order to put them all in ONE fancy post! 🙂  This year we approached addition head on with all of our fun strategies!  After a couple of weeks we found the instruction becoming stale!  We were teaching and teaching addition, but we wanted to to challenge the kids!  We decided to devote a couple of weeks to simply playing fun activities for MAKING TEN!  All of these activities are hands-on and the kind of games where the kids are so busy having fun…that they completely forget that they are learning!  You’ll notice that in each of the games the concept is EXACTLY the same, yet each each activity is different enough that the kids never get tired of it!
Also, be sure to read through to the bottom to grab the freebies that are mentioned throughout the post!

Let’s go back a little though first…as I was banging my hand on my head thinking of new ways to teach my students addition in a fun way I ran across this AMAZING post from the Math Coach’s Corner….

“In recent years there has been a huge shift away from rote memorization of math facts and toward a strategy-based approach for learning math facts.  There’s a big difference between memorizing and understanding.  Sure, we want kiddos to have automaticity with their facts.  Knowing math facts is similar to knowing sight words–it frees up the mind to solve real math problems.  If a child has to struggle to solve 8 + 3, they have no mental energy (or desire) left to grapple with the types of problems that will increase their capacity as a mathematician.

Students should have extensive exposure to the combinations that make ten using objects or drawings in Kindergarten (CCSSM K.OA.4).  This skill goes by many names: friends of 10, making ten, tens partners.  But it’s an absolutely essential skill–move it up to the top of your to-do list!  Raise you right hand and repeat, I will not let my kinders become firsties without knowing their combinations for ten!  Why is is so important?  In 1st grade students are expected to add and subtract within 20 with fluency to 10 (CCSSM 1.OA.6).  That means they should have automaticity of the facts within 10 by the end of 1st grade.  Why?  Because in 2nd grade the standard is for fluency of facts within 20 (CCSSM 2.OA.2).  Do you see that beautiful progression?  Do you also see, however, how critical it is that students master their grade level standards?  And what happens after 2nd grade?  Multiplication, of course, but that’s a post for another day. ”
Thank you, Donna, SO much for helping me realize that “teaching” addition to my students is way more than just memorizing the facts, but first understanding why we are learning “addition” and teaching addition in a way that is automatic…not by memorization, but through applied, hands-on practice and discovery.

We started the discussion of making ten by introducing the friends of ten!  I found this great idea at the Math Coach’s Corner also.  Basically, I told the kids something like this…
Boys and girls today we will be talking about two numbers that are best of friends…the two numbers always want to MAKE TEN!  Let’s start with 5…who would be 5’s friend if they wanted to make ten?  Use your fingers….5 and 5 make ten.  Yes, 5 and 5 are friends of ten. 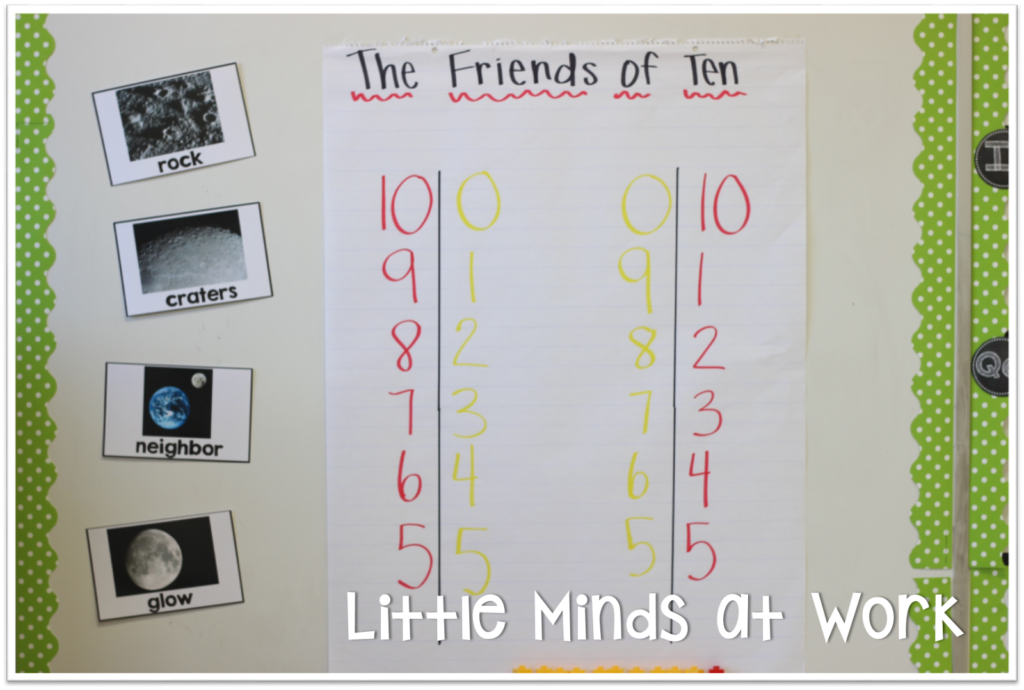 Before charting each friend of ten we made tens towers to match!  10 and 0, 9 and 1, 8 and 2, etc.  The kids worked their fingers to discover the missing friend for each number. 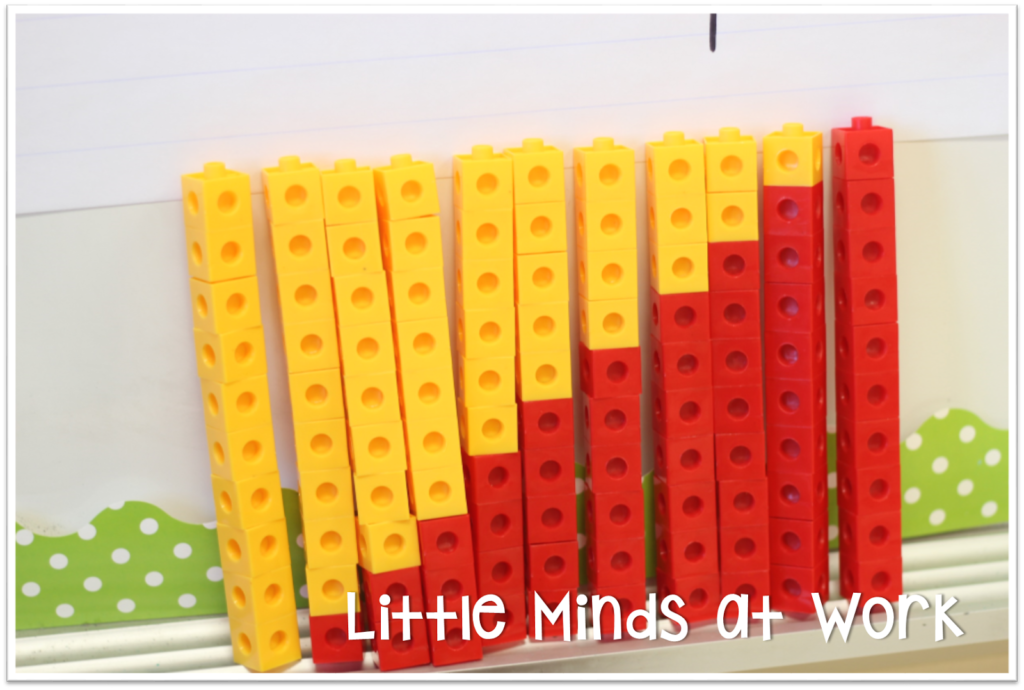 On this day I also put up the following math equations and number bond.  I wanted the students not to solve these {I wrote them already solved}, but I wanted the students to realize WHY we were studying the friends of ten.  So, when they made their way to first grade they could quickly solve for the missing addends using the friends of ten. Did I need to do this?  Of course not and maybe actually I shouldn’t have, but I felt like I needed the kids to know why we are studying addition and how they will apply it in the future.  I actually have one student that took this 2 minute talk from me and now writes friends of ten number bonds on the back of her sheets everyday! 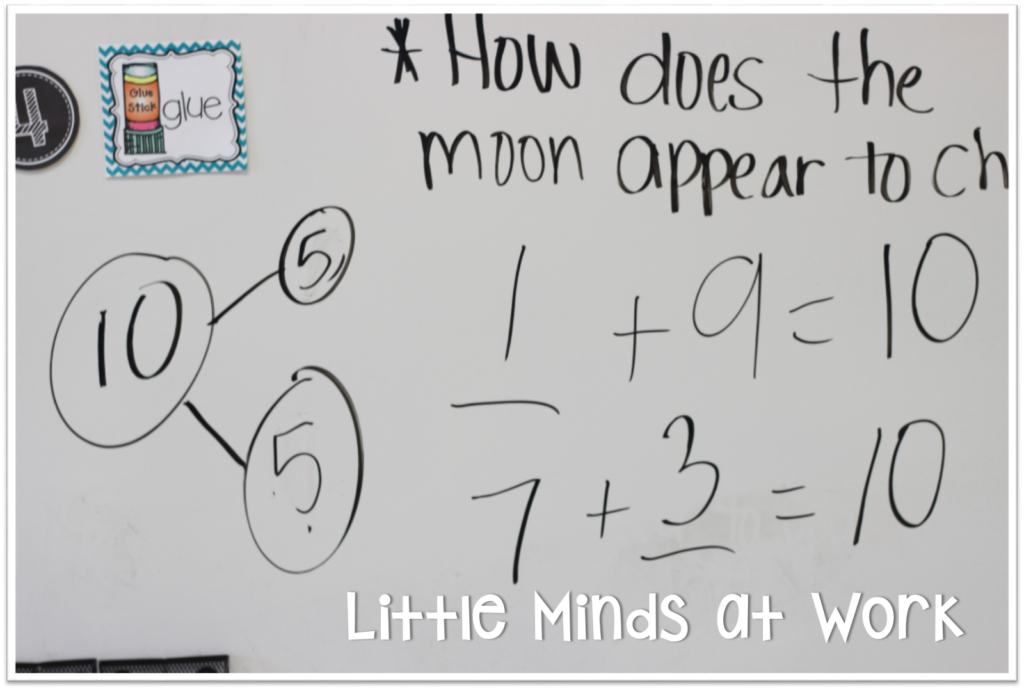 I then introduced this super basic, but effective make ten activity.  Each pair was given 10 snap cubes and “make ten” addition cards.  They took turns breaking the snap cubes into the two parts and discussing the combination with their partners.  “Four and six make ten!” 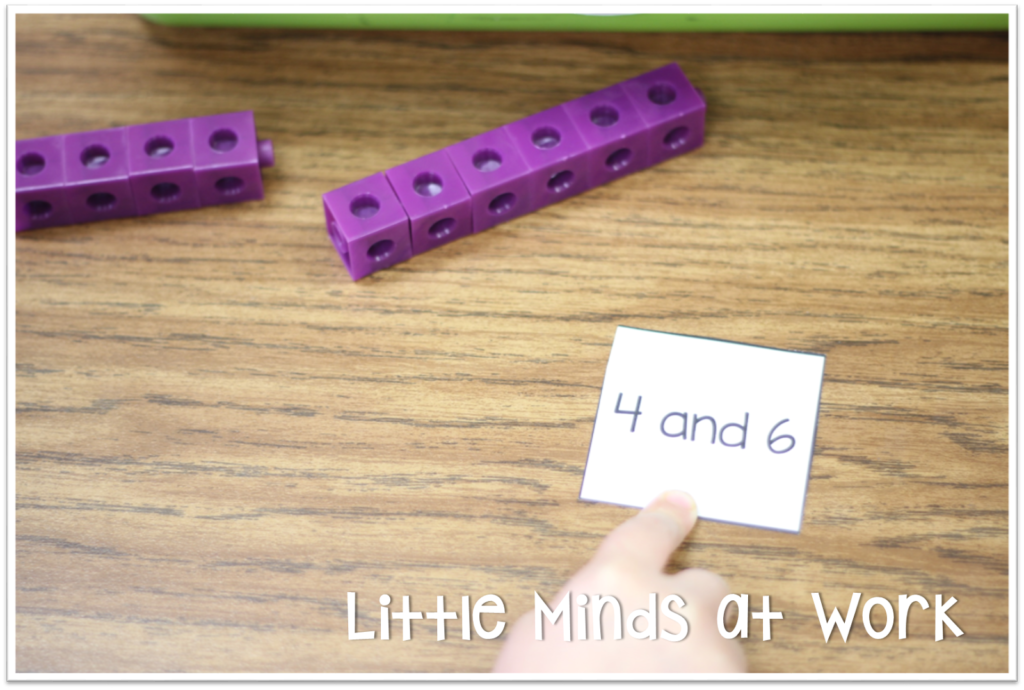 I then introduced the kiddos to a new spin on our game, Spill the Cup.  We have played this one many times before, but never with our new look on friends of ten.  The partners took turns spilling the cup and stating the combinations they see to ten.  “Five and five make ten.” 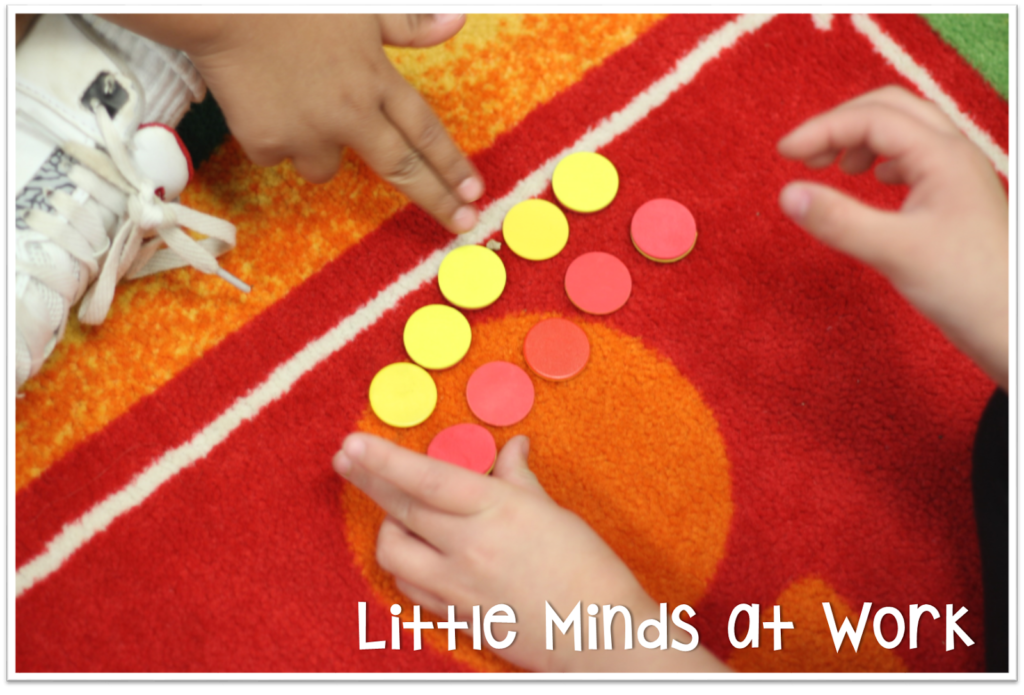 Each partner group also used this freebie Shake and Spill recording sheet as well!  Since then though we’ve continued playing the game, just not with the recording sheet each time! 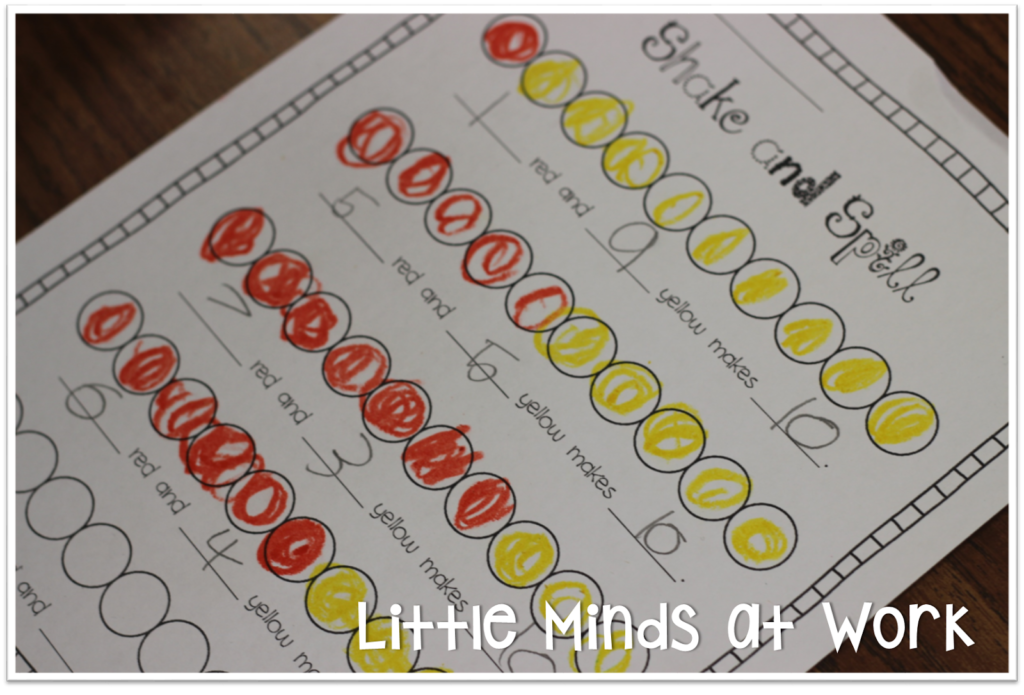 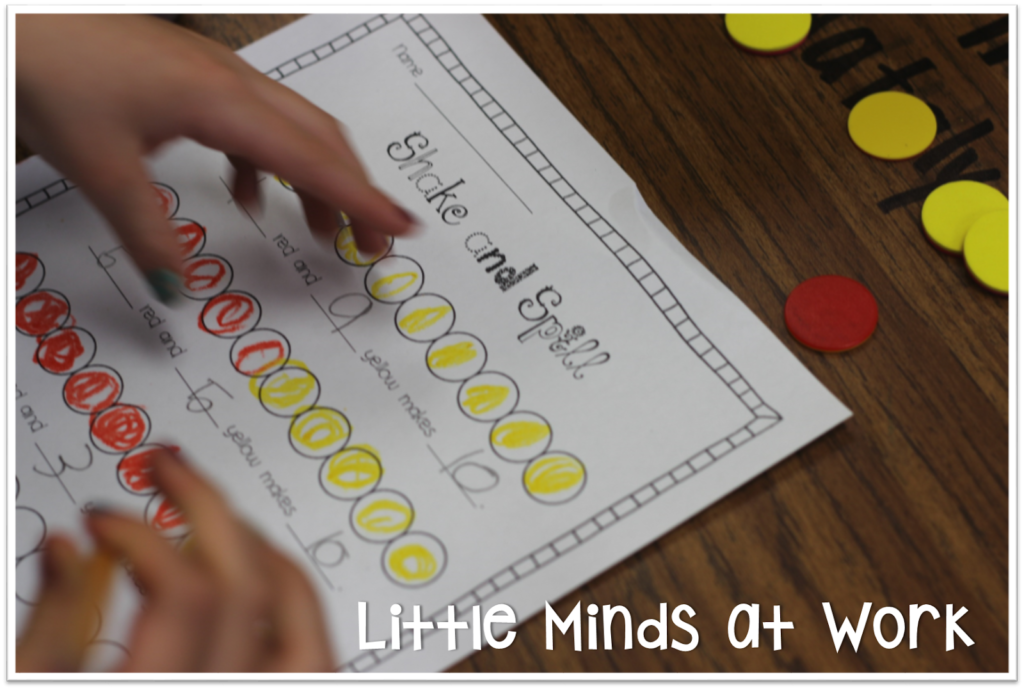 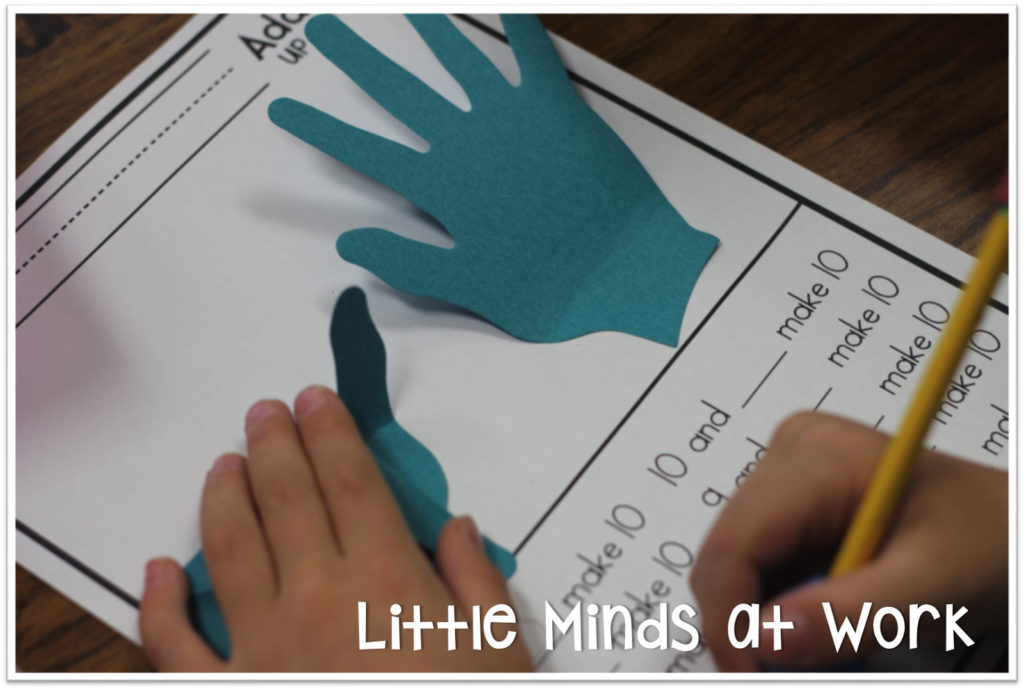 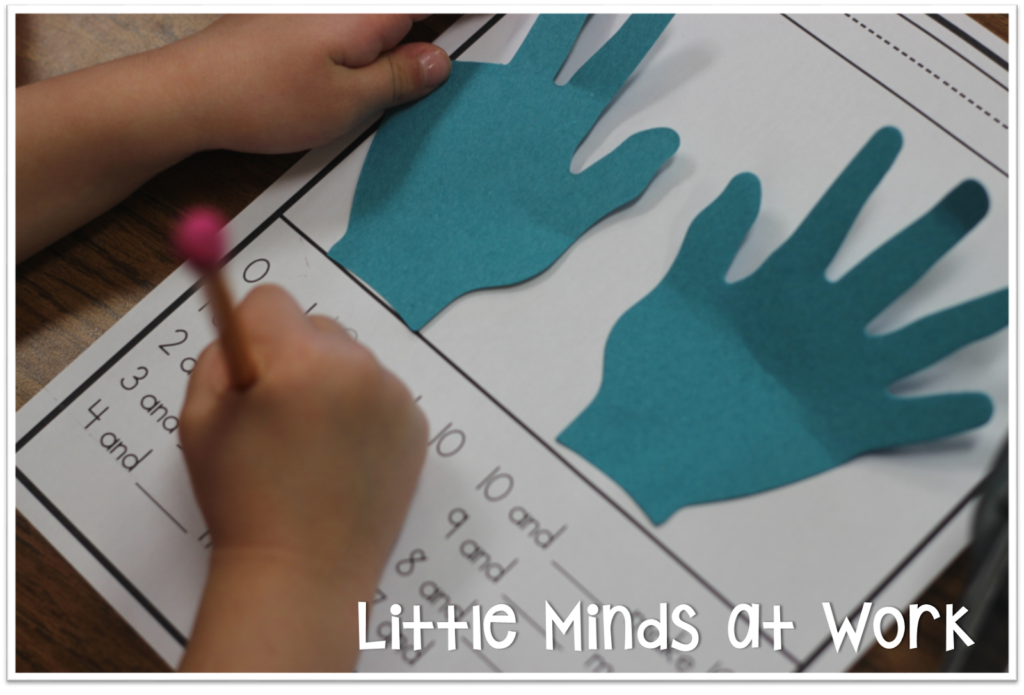 I also introduced the kiddos to a game called Flip to Make Ten!  In this activity each pair of students have a deck of numeral cards.  They line them up and take turns turning over two cards at a time.  If they make ten they have a match!  They could play this one forever! 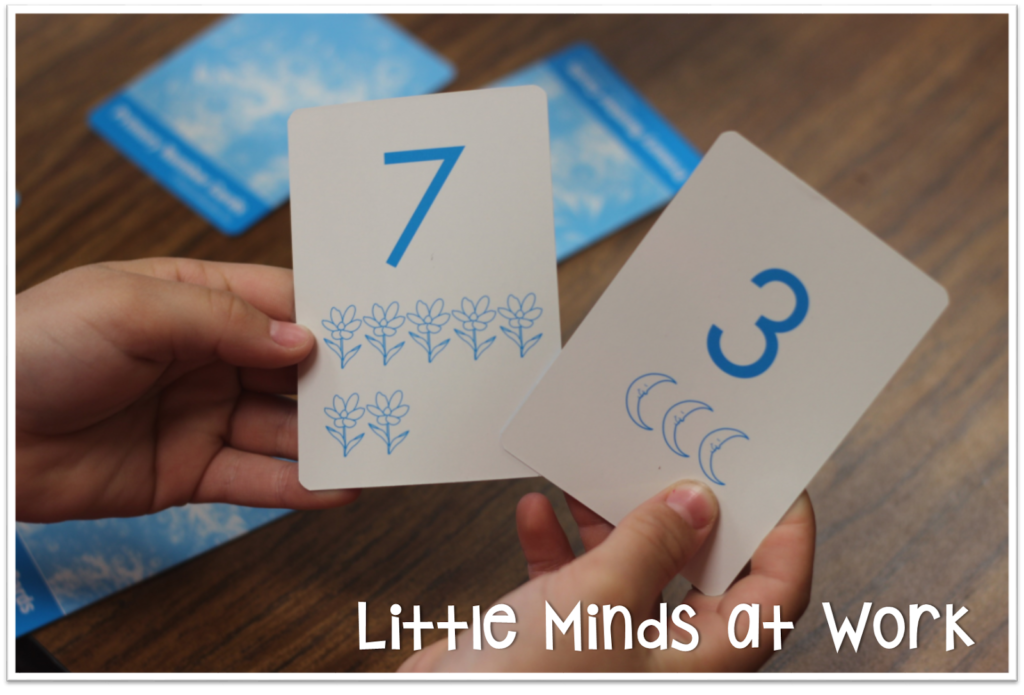 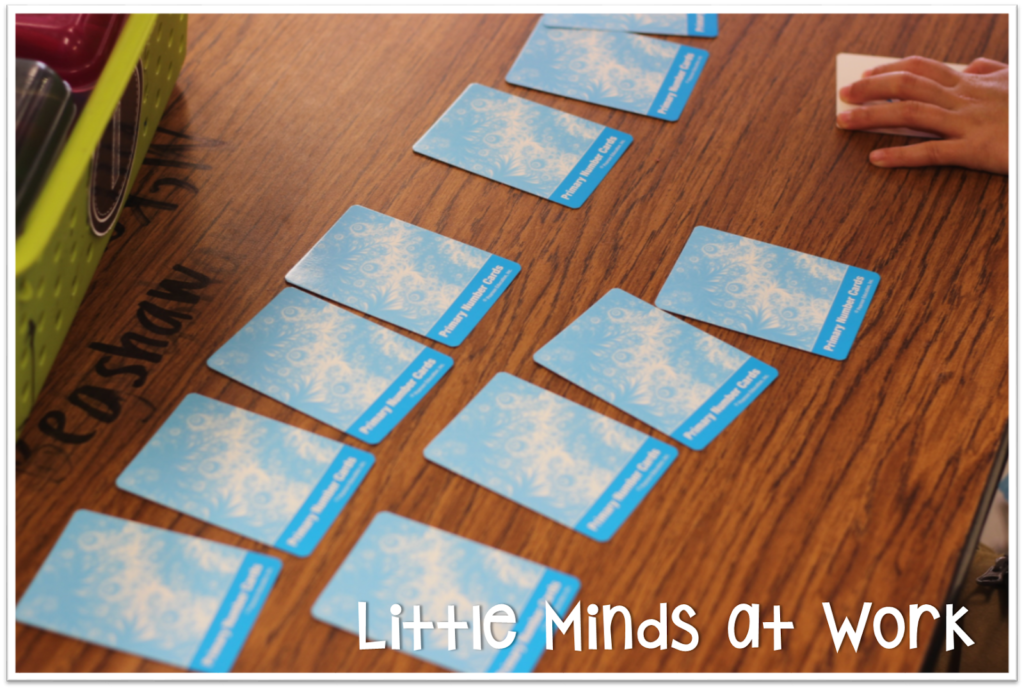 How about a little flip the cup?  For this activity each set of students had ten cups.  They would take turns challenging their partners by flipping over some of the cups.  Their partners would then state the combination of ten…“Seven and three make ten!” 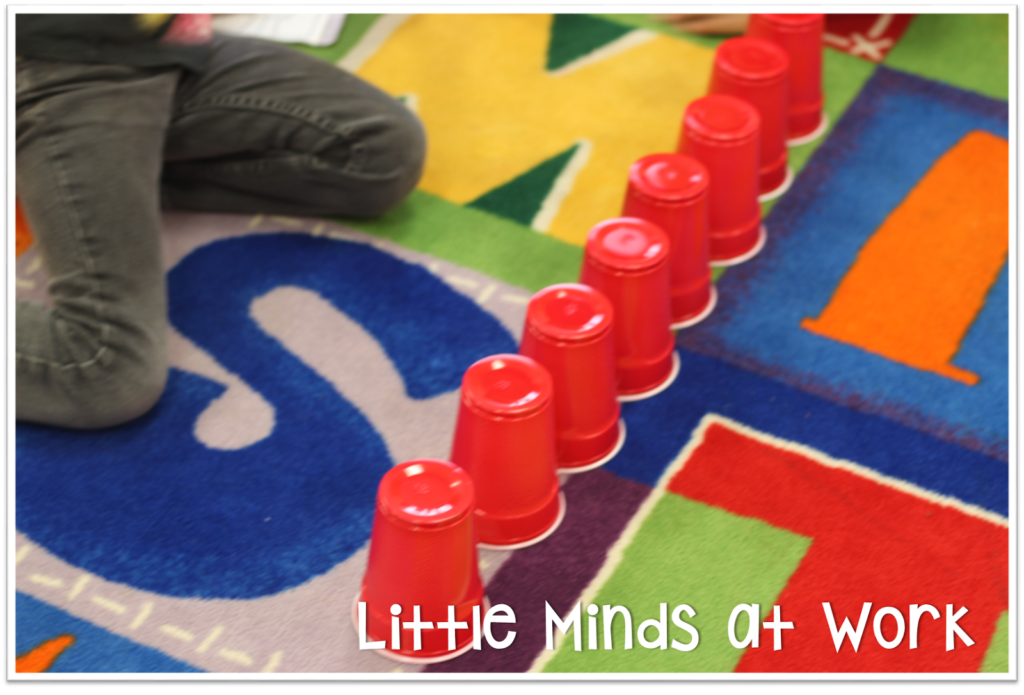 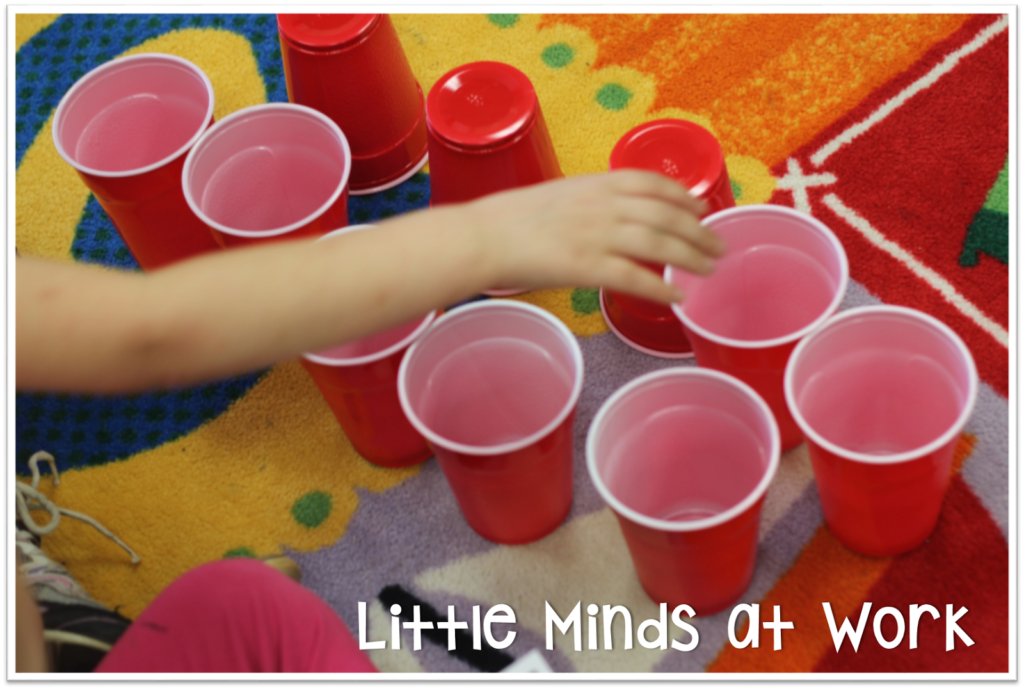 The second time we played Flip the Cup we used these recording sheets!  The students flipped over the number of cups that was first stated on the sheet to discover the missing part! 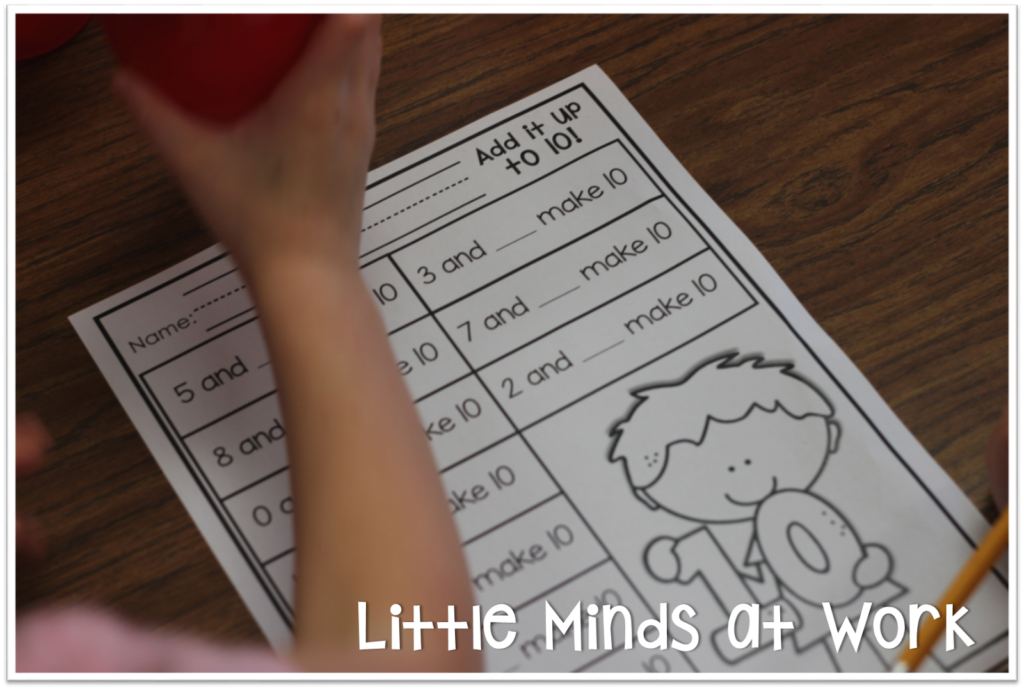 Stickers and combinations to ten?  Well, yes!  For this activity I each kiddo their own set of stickers.  They then chose two different colors to represent a combination to ten!  They then recorded their answers below. 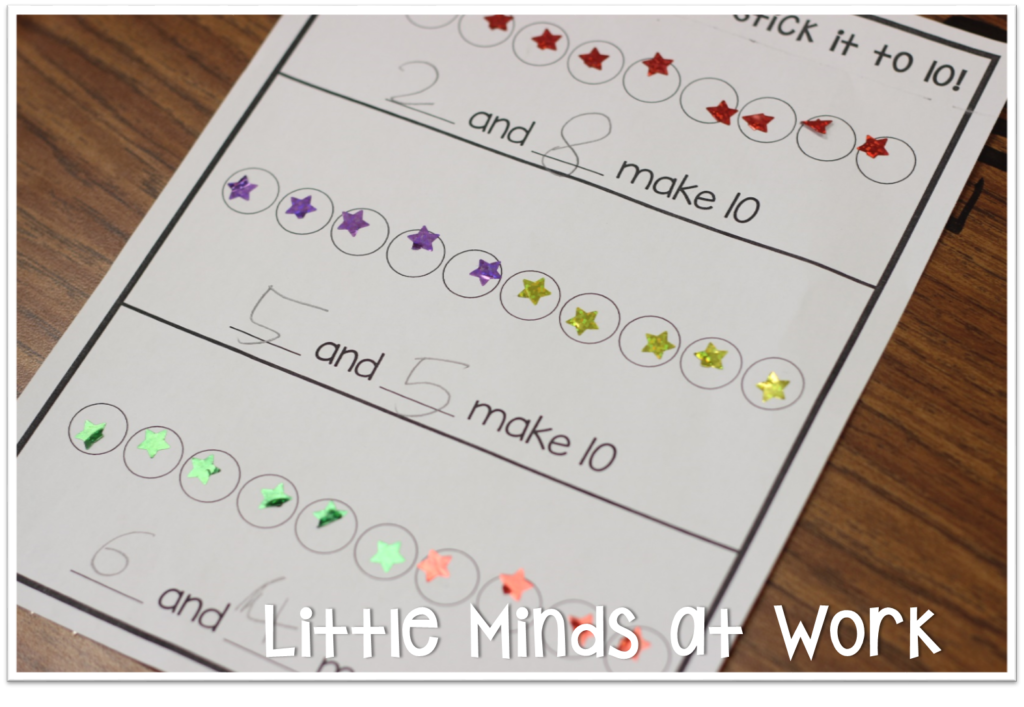 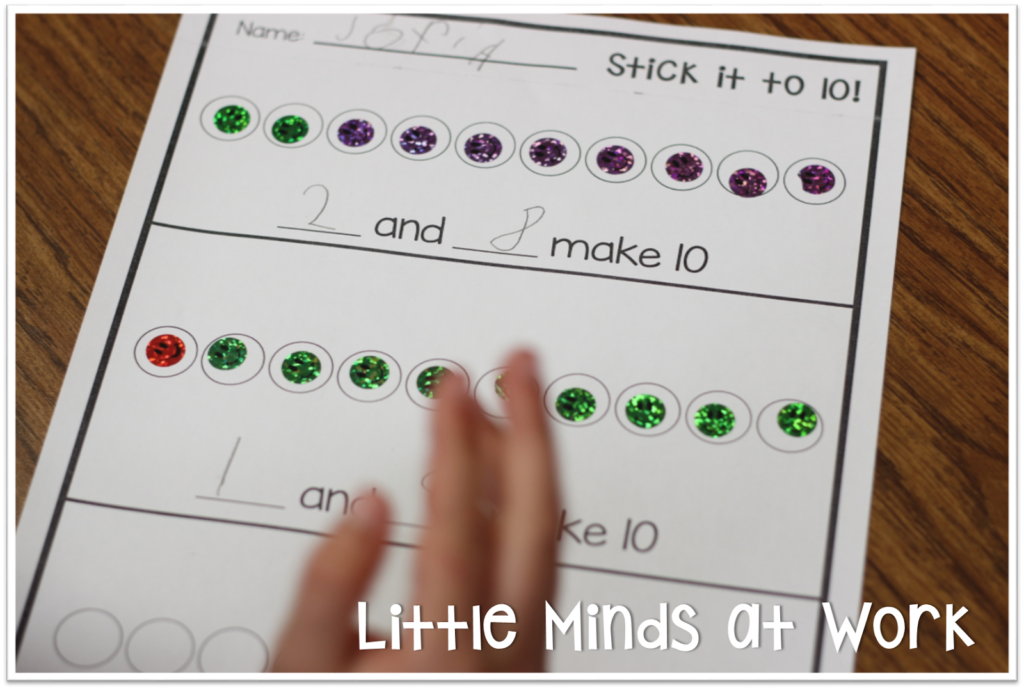 Rainbow to 10 is seriously the most adorable way to practice combinations to ten!  This idea comes from A Cupcake for the Teacher!  Click HERE to view her original post!  You’ll want to see her gorgeous rainbow…compared to my slightly off centered/rainbow color order fail! LOL!  Anyway, the kids loved this! 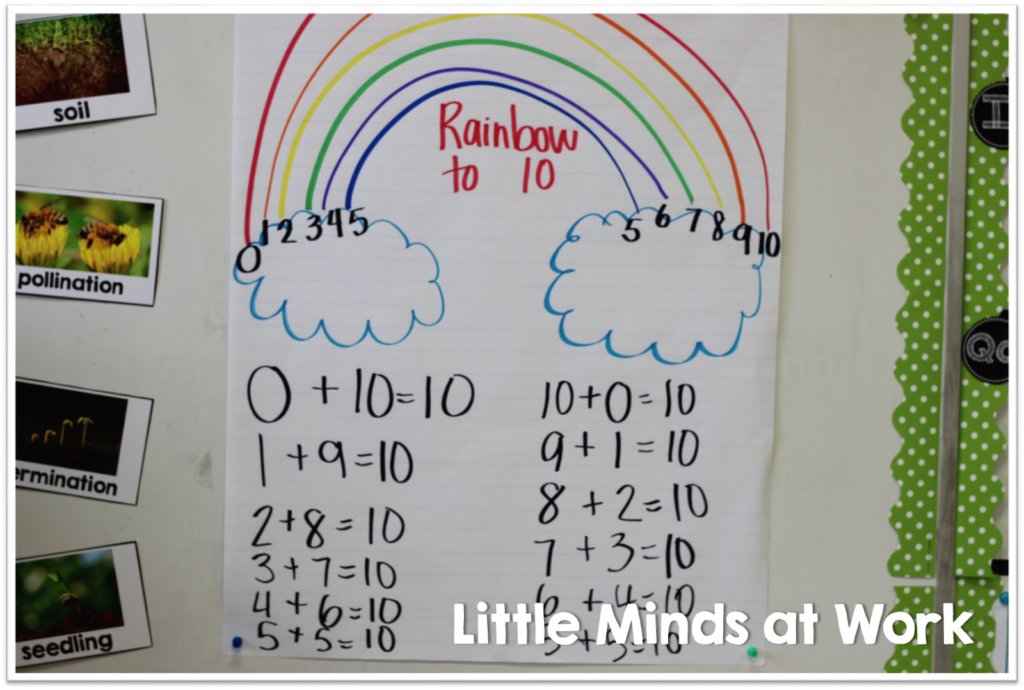 Cupcake offers a great freebie recording sheet on her blog, but I went with this more basic sheet for my kindergarten kiddos! 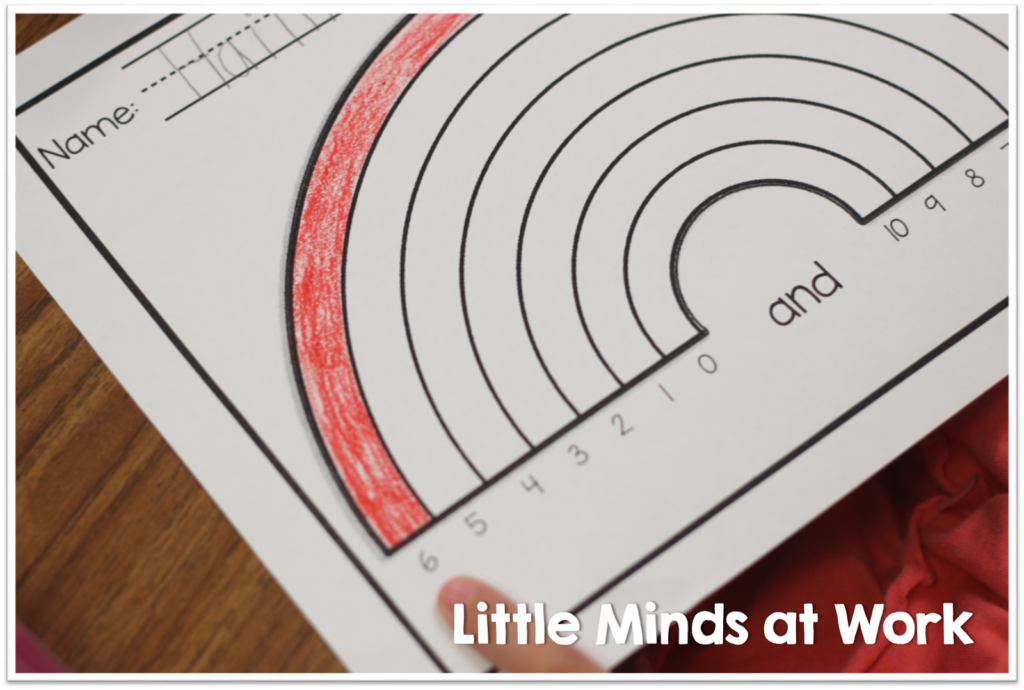 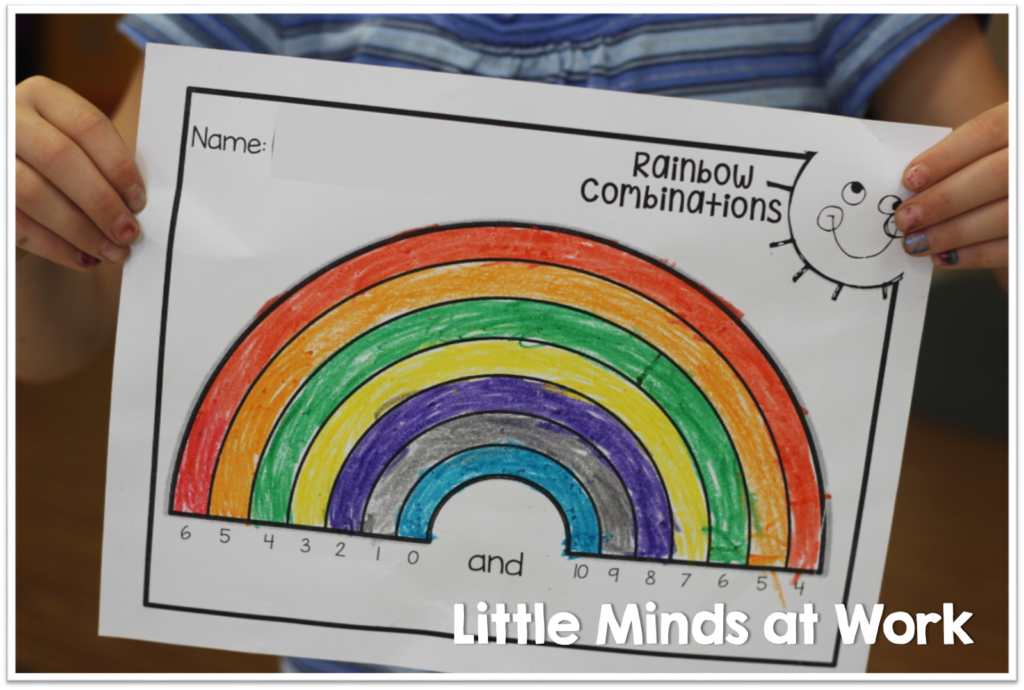 The next one I wanted to share with you is called the ten wand!  I had read about this one in Jessica Shumway’s number sense book, I then stumbled across it again on the Math Coach’s Blog.  For this activity you’ll give student a ten stick, but with 5 of each color. 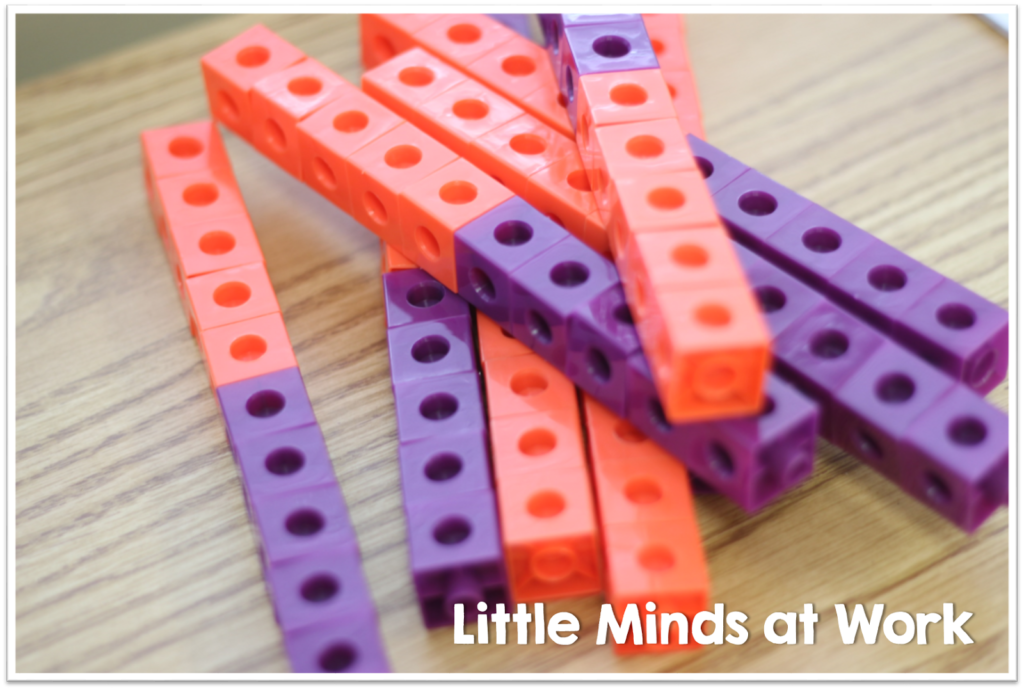 For the ten wand the first partner will break the ten wand into two pieces.  The next partner will then state the two parts that make ten.  For example below….8 and 2 make ten.  The idea behind the two colors of 5…is that the student can easily see the 5 and 3 being 8 and then know that 2 is the second part.  We have been focusing on this a lot this week using two five frames as well.  It’s so important to get the kids past counting 1, 2, 3, 4, 5, 6, 7, 8…we want them to see those PARTS of numbers. 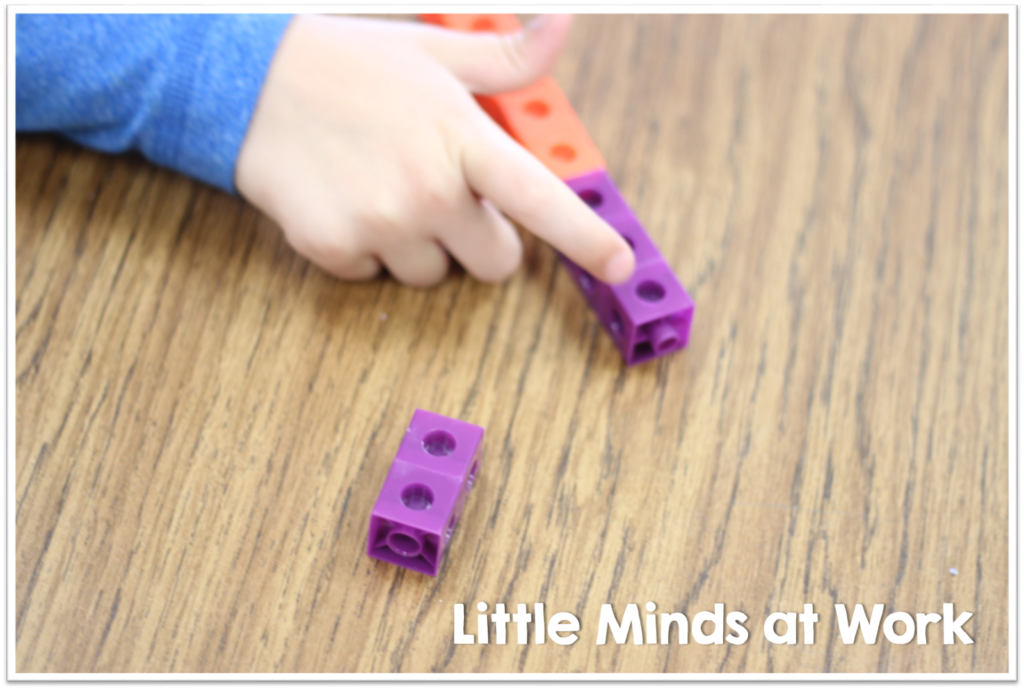 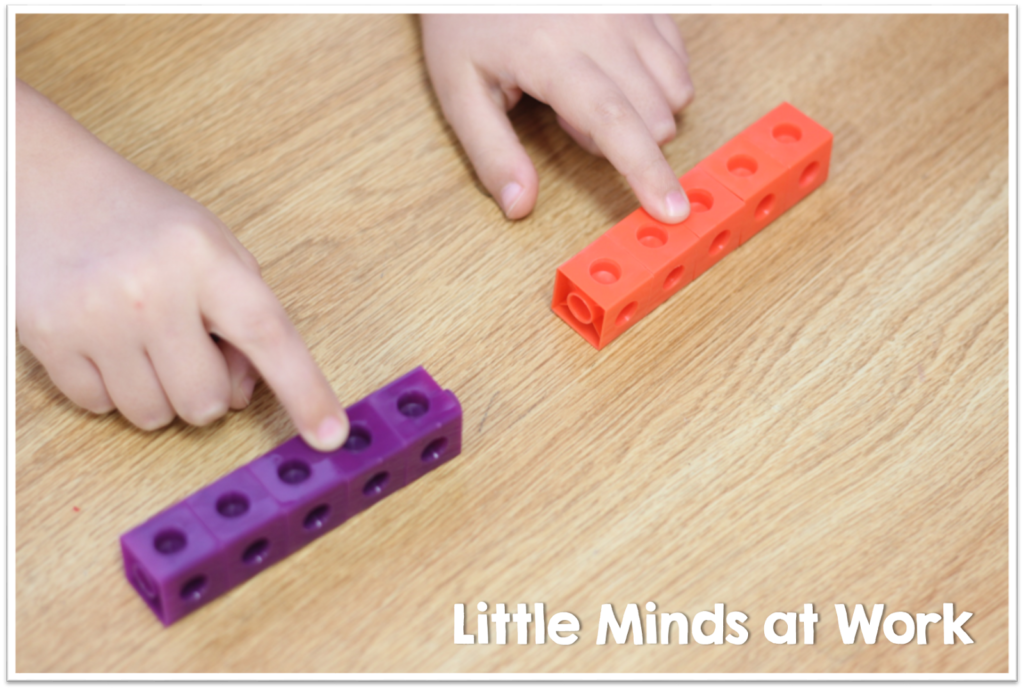 I also wanted to share with you two number sense routines we have been doing at the math carpet for this combinations of ten.  The first one is so easy, but the kids enjoy it!  I will make a statement like this…
5 and 3 make 9…teach your partners if you AGREE or DISAGREE.
The students will then turn to their math partners and discuss whether or not they agree with what I said.  They must explain to their partners why they agree or disagree.  When I call on a student to answer…they must also PROVE to us how they got their answer.  I’ve noticed this part really helps those struggling…I notice them “mock” the speaker and work through the problem using their fingers.
The next routine is combinations of ten word problems.  They go like this….

When we first started these a couple weeks back I would have snap cubes for the kids to get a visual. Now we have moved on to just solving in our heads or using our fingers if needed.  I encouraged the students to put up the ten fingers…then the part I told them, pull those fingers down and see what the missing part was.  They have also learned to count on to get the missing part.  For example, on the problem above… {6} 7 {1 finger}, 8 {2 fingers}, 9 {3 fingers}, 10 {4 fingers}.

We also took these problems down to applied practice through these sheets! 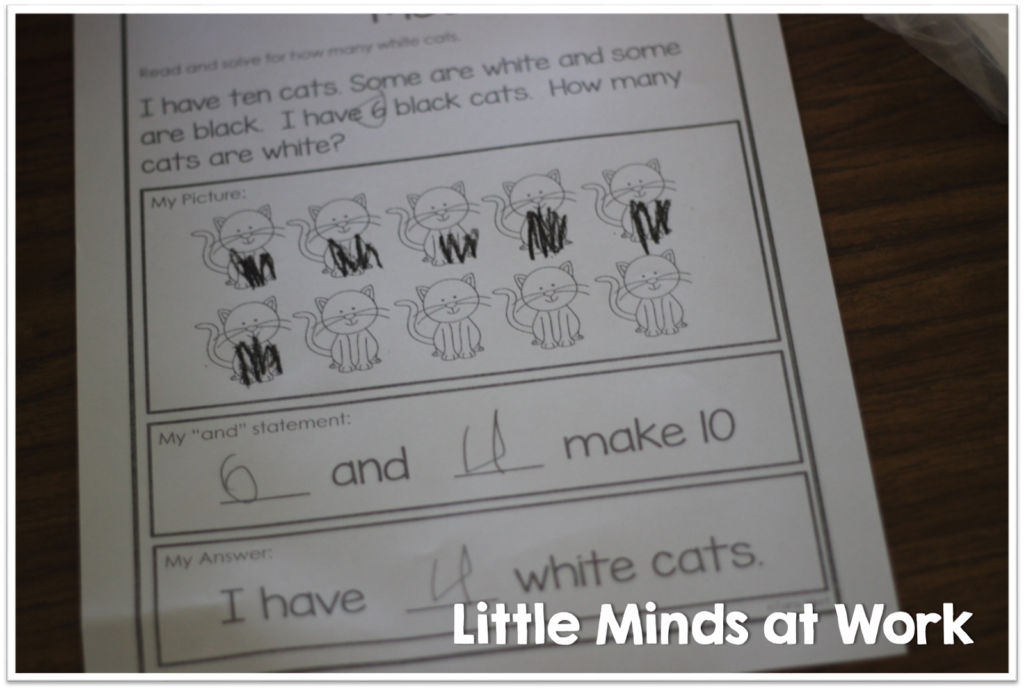 The above sheets and the one I referenced for flip the cup above are found in the packet directly below!  The making has an assortment of applied practice sheets for making ten! 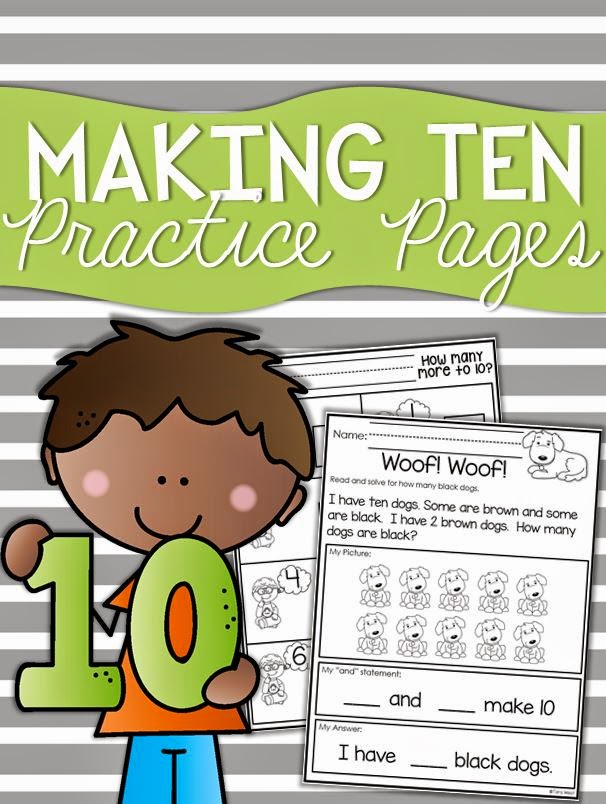 The remaining sheets I stated above are all found in the below freebie packet below!!! 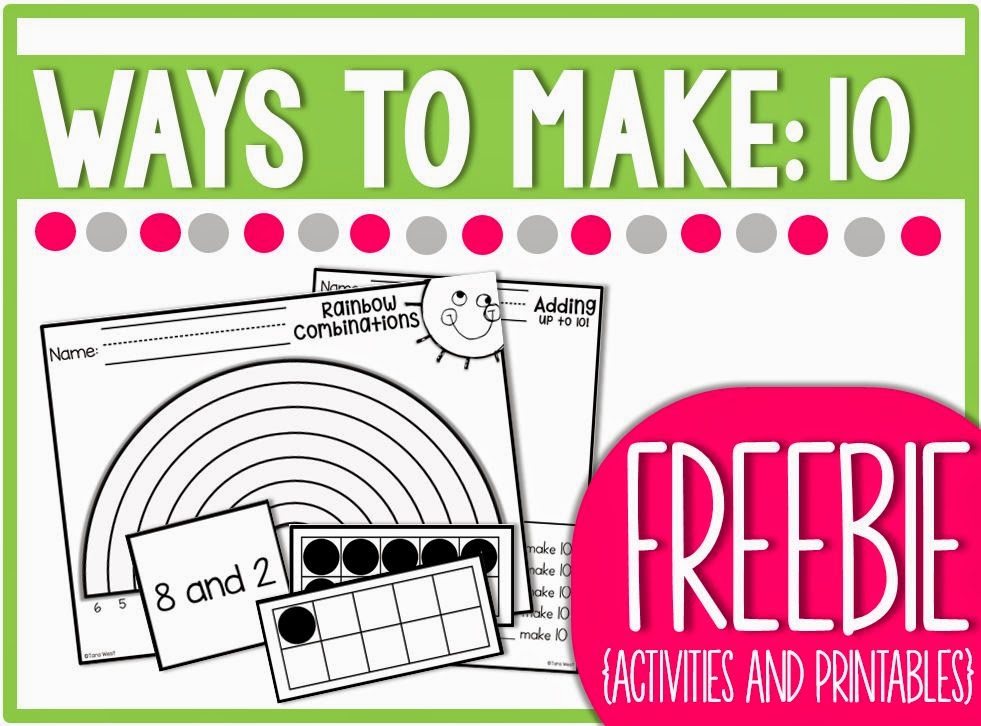